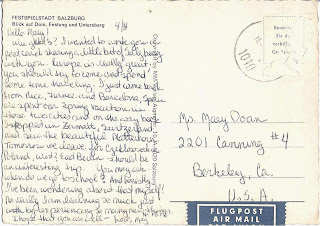 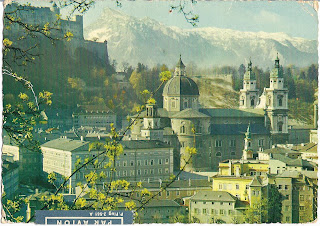 I chose today's postcard because I was looking at which countries from which continents had or hadn't been posted, and Austria was missing.

However, upon review it became more interesting to me for my address than for the location. The address the card was sent to was for the first apartment I ever lived in, in Berkeley. The street was actually "Channing" not Canning. I hadn't thought about this place in a long while.

There were four of us in a two bedroom apartment, and I was lucky in that my roommate actually lived with her boyfriend (now husband), so I pretty much had the room to myself except for the once or twice when we had to "stage" the room for a visit from my roommate's parents. The room was painted a bright bright green and on one wall was painted the skyline of New York City, complete with King Kong hanging from the Empire State Building. The ceiling was dark blue with stars. Only in Berkeley, as they say, but I did love that room!
Posted by Mary at 9:50 AM