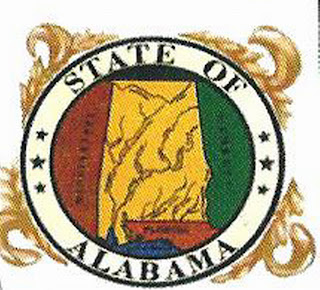 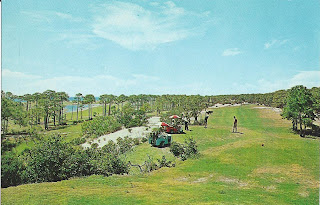 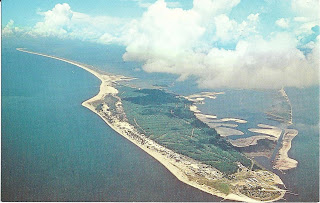 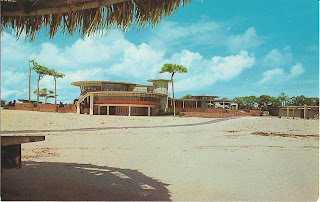 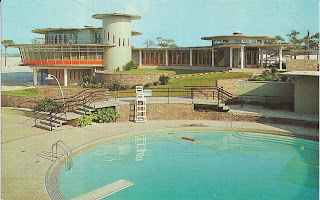 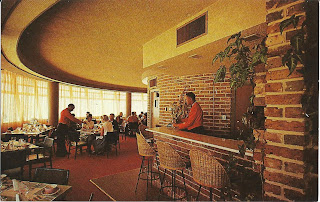 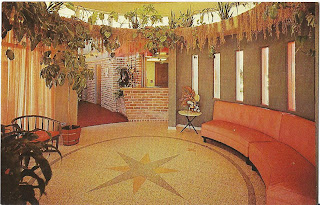 This is a set of postcards from the Isle Dauphine Club on Gulf Beach, Dauphine Island, Alabama from 1957/58. According to an Alabama history website, these exact cards formed a set of six used when the this private resort was initially being developed and sold. They must have been in my grandmother's collection. Perhaps my grandfather was an investor?

While the backs of the postcards aren't posted here, some of the descriptions are choice. About the shot from the beach (center right) and about the pool shot (center left): "Glamorous Isle Dauphine Beach Club on Gulf Beach. A Private Club for Members and Guests. " "Glamorous" appears to have been defined differently in 1958, and certainly doesn't resemble the "Glamorous" of Fergie fame. About the lobby (bottom left): "Exotic lobby of Isle Dauphine Club". I really wonder what's hanging from the ceiling. About the bar: "Dining Room with a Thrilling view of Blue Gulf of Mexico." These shots capture the period so well: the wicker bar stools, the circular building - these must have been quite chichi in their day.

The Isle Dauphine Golf Club is still around, although it appears to be more of a golf course than a private resort, and if you check out the picture here, it doesn't appear to have changed much!
Posted by Mary at 5:39 PM