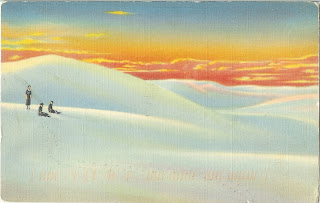 This is one of the most beautiful postcards I (now) have in my collection. I can see why the Mystery Sender almost didn't want to give it up. I thought I'd been to these sand dunes, but I confused them with the ones in Southern Colorado. These are near Alomagordo, New Mexico and are called "White Sands National Monument". In fact, if I think about it, I've visited at least three major dunes sites: Oregon Dunes, some big unnamed dunes near Indian Wells in Palm Springs (pretty trashed now but they used to be spectacular), and the Great Sand Dunes in Southern Colorado. The visitors in the picture look like they might be wearing Girl Scout uniforms from their time (1937). In any case, imagine how out in the middle of nowhere it was then. 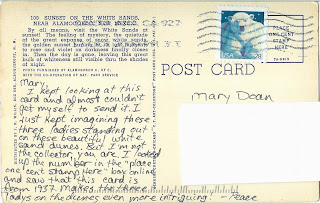 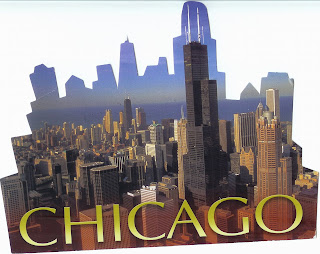 In earlier postings, we had cards that were dye cut in the shape of their states (Idaho, Montana); here we've got our first postcard dye cut in the shape of a city! It's amazing how the Sears Tower dominates the skyline so much the perspective is skewed and the outlines of the other buildings are what make them even noticeable. I also particularly like my friend Rachel's comments both the random ones on each of the fingers and her directional "We live 20 minutes to the left". I think she might have forgotten that I did visit once, long ago. 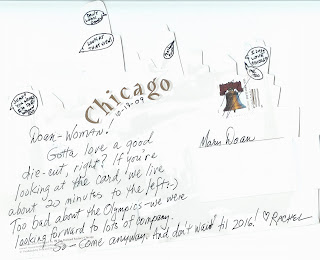 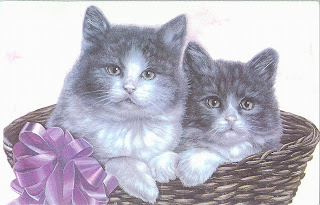 We used to have two cats, but one died at Christmas. Midnight (guess what color she was?) was a good cat and we miss her. However, I have to say that the one remaining cat might be a littler happier as the queen bee, not having to share her food.

This postcard is also sent by the Mystery Sender, who claims to be a dog person rather than a cat fancier. I am partial to both. 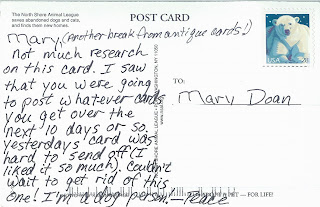