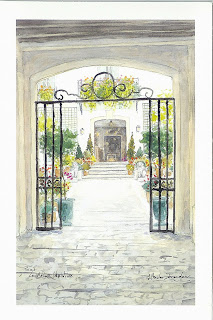 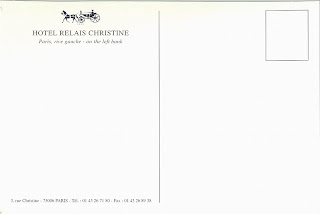 Unlike the "Worst Hotel I Ever Stayed In", the entryway to the Hotel Relais Christine belies what waits beyond.

But the pathway is a tunnel of transformation, and as you enter the courtyard, the jet lag, the white noise, the "Lost in Translation" spaciness begins to melt away. You feel, at last, that this is the Paris of dreams: a small hotel, a solicitous concierge, a communal space that is more living room than lobby with a fireplace and an honor bar, long narrow corridors leading to a small but beautifully Parisian room, a bathroom that is about bathing, and a separate room for the toilet. Ahhhh.

I found this hotel by accident, recommended by a colleague in London and was lucky enough to stay here five or six times.

Once with my mom, who flew from Los Angeles to meet me here at the start of ten days in Europe together. She arrived before I did, and was laughing so hard when she opened the door to our room for me, I wondered if this was how jet lag affected her. But no. She had only just found the toilet, after an evening spent wondering how a bidet worked as a, ahem, receptacle for #2.

Another time, I desperately needed a haircut. The hotel sent me around the corner, and there the hairdresser, who spoke no English and I, who speaks only a little French, concocted one of the best haircuts I've ever had.

The last time I stayed there was in the early Fall with my husband. He arrived from Brussels, I from Athens. This perfect weekend included a trip to Versailles and an incredible dinner at a place around the corner from the hotel. Roger Le Grenouille (Roger the Frog) specializes in, surprise surprise, frog legs. There were only five or six tables of us and we were the only Americans there. At some point, the proprietor decided he had enough guests for the evening, closed and locked the doors, and proceeded to hand out hats all around. The food was good (frog legs taste like chicken) and the French-only music got louder and louder. There was a French family celebrating a birthday and the owner led us all in singing and dancing after dinner was done, and not just to wish the celebrant "happy birthday". We ended the night sitting in a booth in the back with the owner and the chef, snifter of cognac in hand. It was probably the most fun I've ever had in a restaurant.

The hotel seems to be a little fancier (there didn't used to be a spa) and a lot more expensive (although it was never cheap). No matter. Someday, I'll go back.
Posted by Mary at 7:30 AM