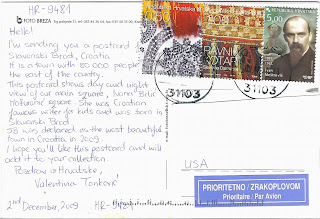 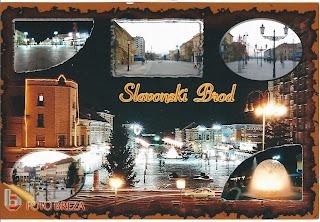 Once again, my view of myself as geographically knowledgeable and otherwise worldly is shattered.
To start, Slavonski Brod is in Croatia (or here, if you're more interested in Croatia from a traveler's perspective), very close to the border of Bosnia and Herzegovina. I don't expect myself to have heard of the town, given I've never been to the town, or even to the country of Croatia. However, when I looked on a map to see where it was, and the map only showed its location in Croatia, I had to look on another map to get the name of its neighboring country. Arg. I think I better start taking the geography quiz more often, especially for Eastern Europe and Africa.
Next, I looked up Ivan Mestrovic, who is on one of the stamps. He is an artist considered to be "possibly the greatest sculptor of religious subject matter since the Renaissance, and the first living person to have a one man show at the Metropolitan Museum of Art in New York City". Did you know this? I did not. [BTW, he's not alive now, having died in 1962.]
Posted by Mary at 8:08 AM