Yesterday, I had hoped to post a postcard of every Hawaiian Island, or at least the ones for which I have postcards, but it was a long day, and I could only eke out a quick post. So today, I bring you all the Hawaiian Islands. Wish I were on one, or more specifically, in the waters off of one, right now, sun on my back. 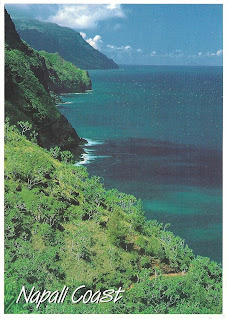 From north to south, the northernmost island of Hawaii is Kauai. This is a postcard of the Na Pali Coast, which you can see via helicopter, boat, or trail. 30+ years ago my then boyfriend, now husband, and I hiked to the first beach on this trail, and spent a few days camping in a cave. It makes you think twice when you're hiking down the trail to the beach, and there's a tidal wave warning sign, complete with a bright yellow post that says something to the effect of "If the ocean recedes rapidly, get immediately up past this pole". It was a looooong way down to the beach. Tidal waves were always one of my recurring nightmares as a kid, so a sign like that makes me pause, just for a moment. 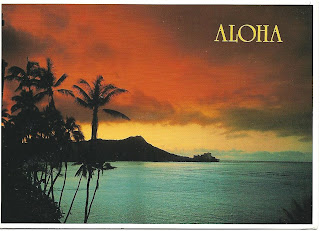 The next island from north to south is Oahu, the most populous island, and home to some of the best surf spots in the world: Sunset, Banzai Pipeline, Waimea Bay. A postcard from Oahu kinda hasta have Diamondhead on it. Either that, or a picture of surfers on Waikiki Beach. Here's sunset over Diamondhead. 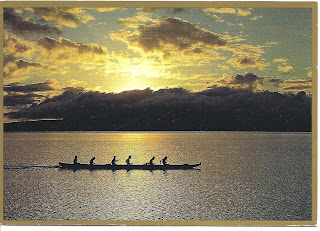 Molokai is next, primarily known for the leper colony on its north shore. The colony, Kalaupapa, was located here because the sea cliffs provided natural isolation from the rest of the island. The story of one young girl's compulsory deportation to the leper colony is told in a book called Moloka'i. The mandatory isolotion policy was in effect until 1969. 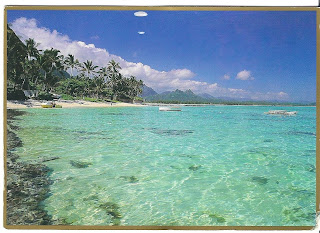 Next up, Lanai. Truth be told, this postcard was written by somebody visiting Lanai, but I can't be positive that the picture is of Lanai. Lanai is known as the "pineapple island" because for years, practically the entire island was a pineapple plantation, and until 1990, there was only a single hotel on the island. 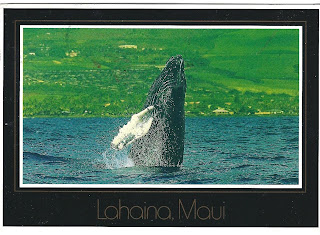 Further South is Maui. This postcard showing a humpback whale breeching is not an unusual sight during the winter and early spring in the waters off Maui. There are whale watching boat cruises, in which you can get relatively close to the whales, but you can also just stand on the shores and watch for them. 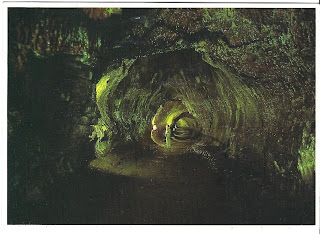 The big island of Hawaii is not only the largest island in Hawaii, it's the largest island in the United States. My cousin lives there, and when she got married, our entire family went for the celebration. While there, we took a helicopter ride over the volcanoes. It was my first helicopter ride (okay, I've only had two, but this was the first!) and incredibly thrilling, complete with headphones playing Apocolypse Now type music, and a rounded glass front, so you could look down through your feet (I got to sit in the front).  This postcard is of the Thurston Lava Tube, which is in Hawaiian Volcanoes National Park.

There are two additional Hawaiian islands, but I don't have postcards for them: Kaho'olawe and Niihau. Kaho'olawe was used by the US military primarily as a training ground and firing range, until 1990. Now it is only allowed to be used for native Hawaiian cultural and spiritual reasons. Niiahu is privately owned, and the general public has only been allowed to visit the island on a limited basis since 1987.