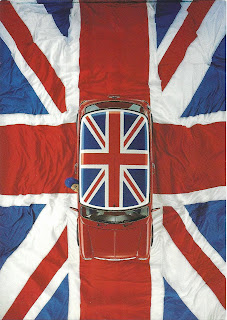 Today is Postcard Friendship Friday, and the theme is (loosely) the Union Jack. The hostess of PFF found some very cool Union Jack Converse High Tops on line, and is looking forward to wearing them.

In any case, my contribution to the theme is this postcard ad for the BMW MINI, first launched in April 2001. It was the successor of the original Mini (note deliberate difference in capitalization), produced by British Motor Corporation from 1965 through 2000. The original Mini was similar in cult status to the VW Beetle, although the VW Beetle predates the BMC Mini by almost 40 years.

Notice there is a head sticking out the driver's side (British driver side) window of the car. On the back, the card says "Helen Bell. Flag Maker." The only Helen Bell I can find is a folk singer in England. Conceivably, everybody (but me) knows Helen Bell, and this is a bit of a joke. The timing of the release of her first album, and her finalist status on the BBC Radio Young Folk Award in 2000 would coincide nicely with the release of the car.