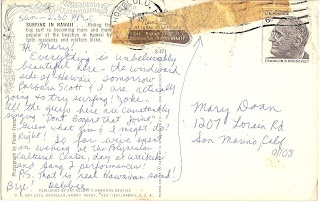 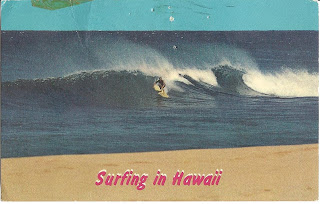 This is one of the older postcards in my collection which was sent directly to me, rather than a relative.  I was still in high school, and this was sent by a friend who went to Hawaii with the church youth choir.

The card includes not very secret secret code about rapscallion-like teenage activities engaged in at the time, but the best part about this card is that the sender taped "actual Hawaiian sand" onto the card when she sent it.  I must have been very impressed with this idea at the time, and actually still think it's cool, as I've saved this card all these years, and I received it well before I really started collecting postcards.  You can see the piece of yellowing scotch tape on the card on the left, which still has a few grains of sand on it.
Posted by Mary at 11:59 PM