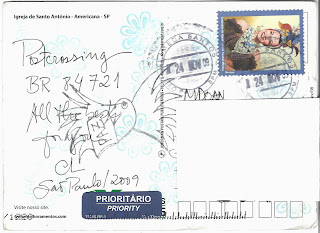 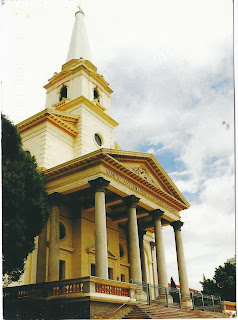 This postcard, which arrived through Postcrossing, shows the "Igreja de Santo Antonio", located in the city of Americana in the state of Sao Paulo, Brazil.

What's most interesting about this card is not the church itself, but rather the discovery of the city of Americana in Brazil. Turns out after the Civil War, a group of people from the Confederate states immigrated here, because they wanted to live where slavery was still legal. Wikipedia puts it more gracefully: "In Brazil, however, slavery was still legal, making it a particularly attractive location for former Confederates." About 10% of the population of the city are descendants of this original group, known as Confederados, and there is a Fraternidade Decendencia Americana which still meets quarterly, in a cemetary no less.

The group brought with them a watermelon called "Georgia Rattlesnake". Burpee Seed Company considers it an heirloom watermelon. I wonder if it's still grown today?
BTW, it's Postcard Friendship Friday, so check out the other postings from the participants.