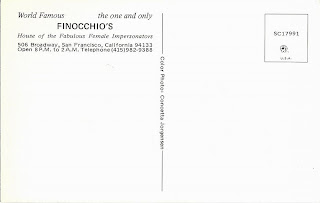 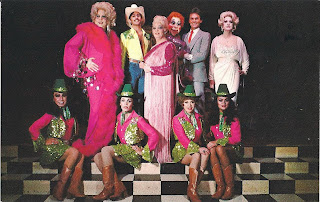 For today's Postcard Friendship Friday may I present the fabulous Finocchio's, another in the series of long time, but now defunct San Francisco institutions.

Finnochio's was in North Beach, opening in the 1930s and lasting until November 1999. It became a famous tourist spot, and you would see crowds of people (clearly tourists and not San Franciscans) disembark from buses and wait patiently in line for the show. I went to the show a couple of times, at least once with my parents (I think), as my Dad always remembered going there in the 50s and wanted to go again.

As cross dressing became more common, the crowds dwindled, and the club finally had to close down. According to one website, Beat poet Lawrence Ferlinghetti's comment upon hearing of the club's closure was "What a drag."