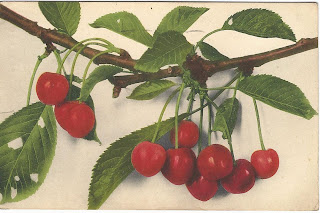 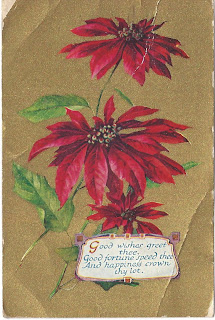 Two more cards from Christmas 100 years ago, neither of which features holly, but do feature poinsettias and cherries.

A while back, I researched a variety of Christmas symbols and their origins, for possible use in Christmas retail advertising. I learned a lot about the poinsettia. Did you know that the poinsettia is native to Mexico, and was called "Cuetlaxochitl" by the Aztecs who used the sap to control fevers and the bracts (leaves) to make a reddish dye? Or that the plant was introduced to the US by Joel Roberts Poinsett, the first United States Ambassador to Mexico, in 1828. He took cuttings from the plant and brought them back to his greenhouse in South Carolina. Or even that 80% of poinsettias are grown in California, with the great majority sold in the six weeks before Christmas? There is a website, The Poinsettia Pages, which shows more history and poinsettia facts.

Cherries didn't come up in my research then, so I wondered about their significance, especially in that they are quintessentially such a summer fruit. Geo-centrism strikes again. Given my northern hemisphere location, it didn't cross my mind to think of summertime Christmases, but in Australia, they are a part of a Christmas dinner. Then I stumbled across a story which includes a Christmas miracle (the cherries), a famous King (King Arthur), and a bit of just desserts (in the metaphorical sense). Give it a quick read: "Sir Cleges and The Christmas Cherries".
Posted by Mary at 6:49 AM