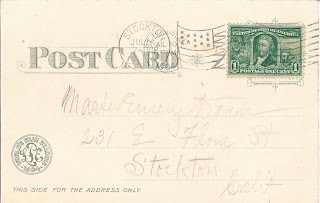 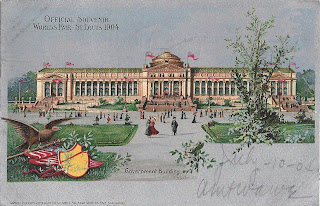 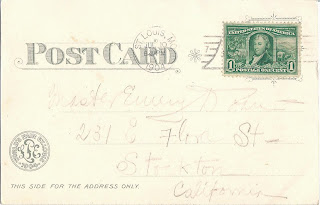 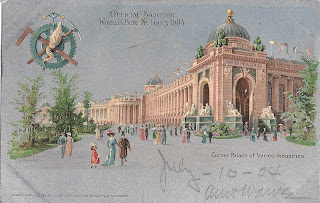 Two "Official Souvenir, World's Fair - St. Louis 1904" postcards, sent to my grandfather on July 10, 1904. It's from the scrap book I have filled with postcards, most sent by an Aunt whose name I haven't been able to decipher to "Master Emery Doan" in Stockton, who was my grandfather. I posted cards from this collection earlier here.

I learned a lot looking into this postcard:

1. "Split postcards", in which the address and the message are in two halves on one side, and the photo/art is on the other side, originated around 1910.

2. Both cards are printed by the Samuel Cupples Envelope Company of St. Louis, "Sole World's Fair Stationers". The Metropolitan Postcard Club of New York City, Publishers section, describes the Samuel Cupples Envelope Company as follows: This envelope manufacturing company was the first to utilize wood pulp. They produced many patriotic covers and entered the postcard business early enough to make cards of the Spanish American War. They publishes the official card set for the Louisiana Purchase Exposition in 1904. They are also noted for their many hold to light cards. When Cupples died in 1912 this was the largest envelope manufacturer in the United States. Interesting to learn about the publisher of the card; even more interesting to learn there is an entire website devoted to publishers of postcards! BTW, these are not the light cards spoken of above, although silver ink was used in the printing of these cards.

3. The St. Louis World's Fair was actually the informal name for the Louisiana Purchase Exposition, which celebrated the 100 year anniversary of the Louisiana Purchase, an event considered by some to be "an event in American history having an importance secondary only to the Declaration of Independence".

4. The postcards above feature the Corner Palace of Varied Industries and the Government Building. A website here shows what might be all the postcards from this 1904 world's fair.

5. Interesting to think that as early as 1904 the terms "official souvenirs", and "sole stationers (or insert your business category here)". Just an early version of a trade show or the Olympic Games!