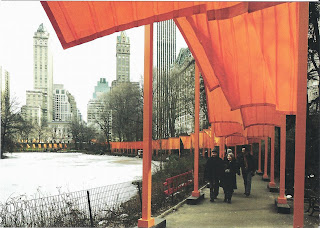 A boatload of words, a shelf full of books, and miles of film have all been created, describing New York City far better than I ever could. It is one of my favorite spots on the planet and I have spent a lot of time there.

But in 2005, it had been four or five years since I had been, and when the publicity started around the Christos' temporary art installation, The Gates, in Central Park, I became obsessed with seeing it. I found a cheap fare, gathered up one son and one niece, and we flew off to NYC.

We landed late, in a huge snow storm, and jumped into what was probably the last car traveling from JFK into NYC. We were staying at The Plaza as it is right on Central Park and was about to close for major renovations. (It needed them badly.)

The next morning, we headed into the park. It was a beautiful day, and the fresh fallen show from the night before was stacked four inches high on each Gate. The entire effect was incredible.

The Gates was quite controversial – some loved it and its challenge to the concept of “what is art”?; others thought it defaced the park and was a big waste of many; more others were glad it brought incremental tourist dollars into the city, mine included. It was only up for about three weeks.

Christos and his wife have produced a number of environmental art installations. Two others I've seen, and only at a glance while driving by, were The Umbrellas 1991 in Southern California and The Running Fence 1972-1976 in Northern California. 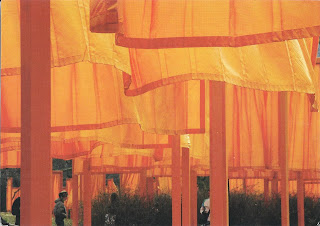 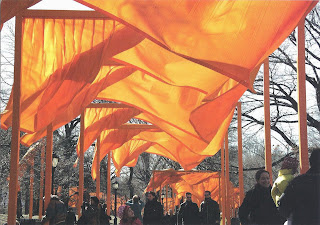 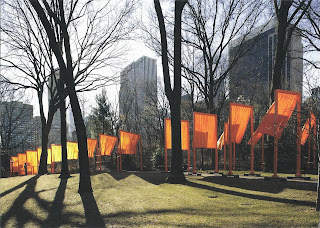