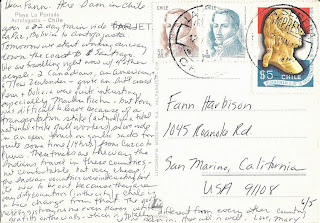 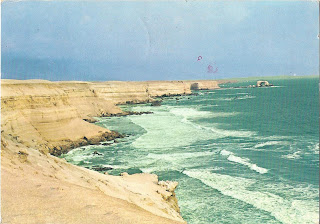 Two days in a row featuring postcards from Chile. One from my friend, Paula, on one of her many business trips to Latin America; one from me to my grandmother, 30+ years ago.

This card reminds me of so many things, particularly the few days we spent in Antofagasta. We had come off 48 hours on a train, crossing the border into Chile in the middle of the night and as we did, being called individually into a private room on the train where a Chilean carbineri checked our passports and asked us questions, in Spanish. A little bit intimidating, to say the least. Pinochet had not been in charge that long (Allende was overthrown in 1973 and this was 1978)and things were pretty strict in Chile then.

In Antofagasta we found a hotel-ish kind of place, near the ocean, consisting of old busses sunk in cement and painted grey, each transformed into two "rooms". We shopped a local market for food and discovered something we'd never seen, pepinos, which tasted kind of like a cross between a cucumber and a melon.

One night, we saw a sign for free food in a stadium in town hosted by the Chilean army. Given we were traveling on very little money, we decided to check it out. We arrived to find a large stadium, 75% filled with people, watching a show of military might. Explosions were going off, lights were flashing, tanks were wheeling around - it was quite a sight. At one point we realized that we were being glared at by people in the audience. It was very uncomfortable, so we left. I have no idea if they didn't like Americans and had identified us as such, or they didn't like outsiders and knew we didn't belong.
Posted by Mary at 11:01 AM