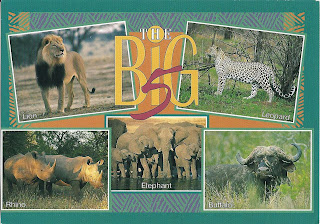 The Big Five are the lion, the leopard, the rhino, the elephant and the cape buffalo, and it's a big deal to go to Africa and see them all in one trip. At least that's what people tell me, and it also says so on the back of the card. The term was coined by hunters, as these five are the most difficult animals to hunt on foot. And among the most dangerous.

The Big Five are not to be confused with the Big Four Central Pacific Railroad barons of California - Stanford, Huntington, Crocker and Hopkins - and the name of a restaurant honoring them on Nob Hill in San Francisco.
Posted by Mary at 5:04 PM