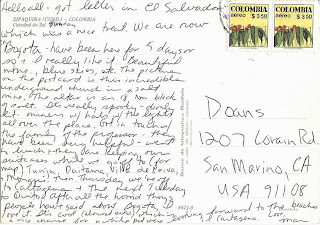 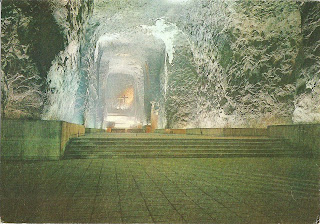 Another postcard sent from my travels throughout Latin America in the late 1970s. This one comes from the Salt Cathedral, Catedral Del Sal, outside of Zipaquira, Colombia.

We took a bus here from Bogota, probably on a weekday, as it was virtually devoid of tourists. As the postcard says, the only people around were miners with headlamps on. It was dark and quiet, and quite eerie. Turns out the site we visited in the late 1970s was shut down in 1990 due to structural issues, and a new site built 200 feet below.

The message on the postcard reminds me that a few days later we took a bus to another town, this one about four hours outside Bogota, called Villa De Leyva. It is described in Lonely Planet as follows: "Declared a national monument in 1954, the town has been preserved in its entirety and virtually no modern architecture exists."

We arrived late in the afternoon, practically at dusk, and the main plaza was almost completely deserted. (If you click on the first Villa de Leyva link above, you'll see a picture of the main plaza - it looks deserted now!) We paid a young boy a couple of pesos to take us to a place to stay and he led us down a deserted side street. When we arrived, we were at first taken aback. All we saw was a wooden door - no marker, no sign, no indication that this was a place to stay. The pock marked and crumbling stucco walls had us thinking we may have made a horrible mistake. However, we knocked and were greeted by a friendly proprietor and entered a beautiful, although small courtyard. There were a couple of rooms, all furnished with old, heavy, but comfortable looking colonial furniture. It was good! The next morning we wandered around the town, and were easily the only tourists (and therefore the only Americans) there.

Funny, I hadn't thought of either of these places in a long time. Interesting to look them up and read about their significance as tourist destinations today. Hurray for saving postcards! Better than a diary any day.
Posted by Mary at 9:01 AM