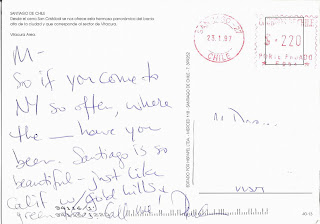 During my travels in South America, we spent almost six weeks in Chile, arriving in Antofagasta by train from Bolivia and hitchhiking all the way through Santiago to Puerto Montt.

We stayed in Santiago a couple of days, attempting to visit the Moneda, the seat of the president of Chile and a few of his ministers. We pretended we didn't speak Spanish and played dumb, getting relatively far inside the building before somebody stopped us. We were particularly interested in the Moneda because we knew that Allende had been killed or committed suicide here on September 11, 1973. Before we arrived in Santiago, one of our rides came from two military officers one of whom gave me the pin off his uniform that said "September 11, 1973".