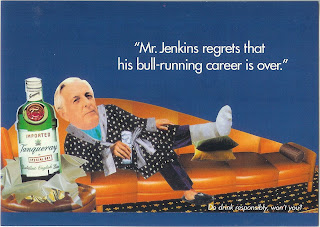 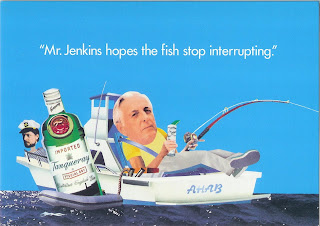 Found. Mr. Jenkins postcards, from a famous Tanqueray Gin ad campaign in the 90s. A month ago, I mentioned Mr. Jenkins when I featured Mel, Mr. Jenkins' female and vodka counterpart in a previous posting on postcard advertising.

This eccentric, celebrity-like, but not celebrity, endorser is very much the precursor of "The Most Interesting Man in the World” campaign, currently running for Dos Equis Beer. Both appeal to a potentially aspirational male self-perception: Mr. Jenkins as bon vivant, sipping on gin martinis in a variety of manly or semi-manly situations; TMIMITW, as suave machismo. Both do an incredible job using subtle exaggeration which activates the smallest seeds of desire and admiration we often aren't even aware exist. The big difference is the "Mr. Jenkins" campaign only used billboards and postcards, while "TMIMITW" campaign started as radio (by far the best ads) and expanded to national television. Big difference in $$$$$. 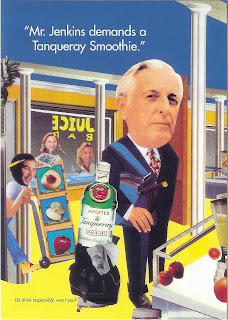