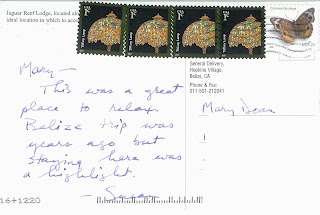 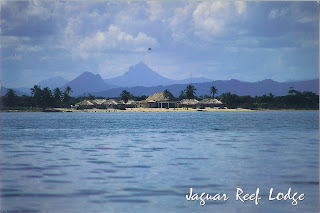 When I traveled in Latin America, we ran into a lot of people who had spent time on the different Cayes off the coast of Belize. Caye Caulker was frequently mentioned - it was one groovy stop on the gringo trail of the 1970s. I remember stories of cheap lobsters, beautiful beaches, and bathrooms (well, outhouses) on the ends of piers that emptied into the ocean. We didn't make it there.

A few things I know about Belize. 1) English is spoken there - it was a British colony for a long time and is still part of the British Commonwealth. 2) For years (and I don't know if this is still the case) Belize didn't appear on a Guatemalan map - Guatemala didn't recognize Belize as a separate country; rather they claimed it as their own. 3) Lastly, the Palancar Reef (second only to the Great Barrier Reef in size) stretches from Cozumel down along the coast of Mexico and Belize, and there is supposed to be great diving and snorkeling.