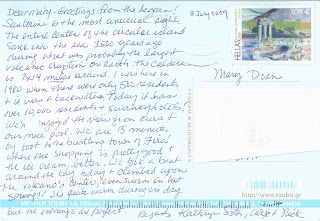 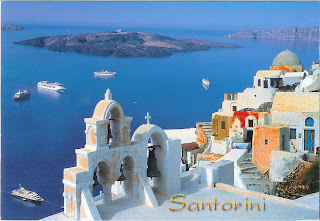 If you only get to visit one Greek Island in your life, it has to be Santorini. My friend, Kathryn, is visiting Greece this summer with her sons - it's particular meaningful for her as she is Greek American. She sent me this card. I've also added some that I collected while I was there to this post.

I went once, with my friend P. She is married to a Greek, and for a time they were living in Athens. I suspected they might not live in Athens for too long, so I went to visit them while they were there. P and I took a side excursion (one of several) to Santorini.

Santorini is nothing short of spectacular. The sparkling white buildings, with blue domed roofs sprinkled here and there, perched on the cliffs over the inland sea - the whole scene takes your breath away. When we went there, it was October, so peak summer season was over, and the place was relatively empty. Instead of five cruise ships per day, there was only one, and the beaches were deserted - the water was a bit cold. We went wine tasting (not great wine, but fun to check it out), visited both a red sand and black sand beach (although pebble is a more appropriate description than sand), and talked with a man who had a little shop in a cave on the red sand/pebble beach who carried his provisions in by donkey. There is also an in-progress archaeological excavation on the southern tip of the island (can't remember the name) and a quaint and picturesque fishing village in the north, Ia or Oia, depending on the map (pronounced "ya"). 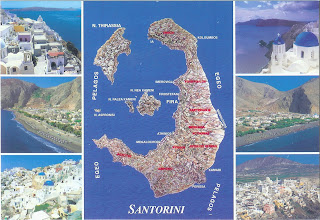 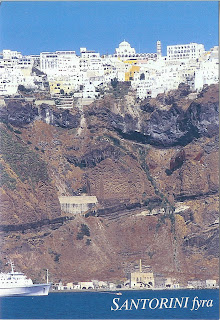 We stayed in a very cool hotel, Chromata, about 15 minutes from the main town, located on a cliff overlooking the sea. The rooms were caves built into the cliffs, with low ceilings and a fair amount of mold, but still pretty incredible. There was an infinity pool, which didn't just make you feel like you were on the edge or a precipice - in fact you were. 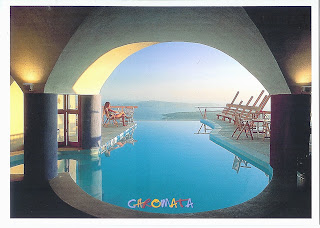 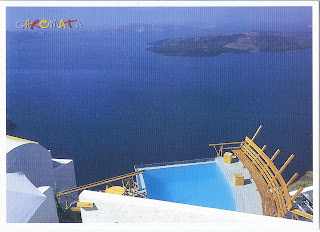 I have to say I was not that comfortable sitting on the wooden seat to the right of the pool. The angled back for leaning back on was hanging over a pretty high cliff. If you have any sort of vertigo, which I do, it's a little creepy.

P.S. Looked up name of ruins and it is Akrotiri. Some people believe it is part of the ancient city of Atlantis.
Posted by Mary at 1:20 PM