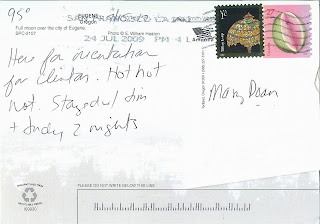 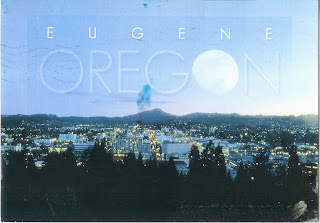 My handwriting has certainly deteriorated since the the use of a keyboard instead of a pen. Hmmm.

Sent this postcard to myself in July, when we were in Eugene, Oregon for University of Oregon orientation for our son, Clinton. He'll be headed off for his freshman year in college in September. It was very hot while we were there, which I don't think will be the case come about November. He says that as a San Francisco kid, he won't mind the drizzle and rain. We'll see how it goes.

Other than that, the town is beautiful, the campus exciting, and it's going to be a great place for him.
Posted by Mary at 8:58 AM