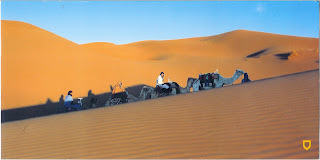 My friend, Evelyn, moved to Morocco about 2-1/2 years ago. She didn't mean to. She was on her way to Turkey to teach English as a second language, but was going through Fez, Morocco on the way there to take a semester of Arabic at the Arabic language institute in Fez. Three months later she was teaching ESL at that same school, was married a Moroccan man 20+ years younger than her, and bought a 200 year old house in the Medina (walled city) which she is fixing up to be a B&B. Quite a change.

This postcard arrived yesterday, in a package she sent me. The package included some very cool shoes, and bracelets made of the buttons from a Berber burka.
Posted by Mary at 11:08 PM