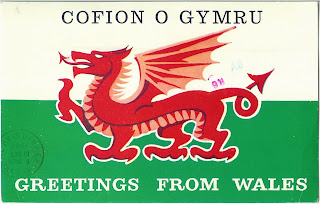 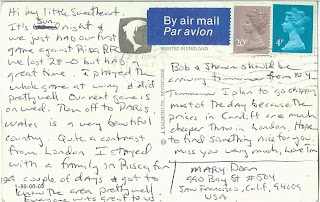 When I worked at Caltech, one of the professors talked me into playing on a women's rugby team he helped coach - the Eleanor Rugby Team. The Eleanors, as we were called, was probably the first women's club rugby team ever. This led to my husband playing rugby as well for Crown City Rugby Club. The two teams were linked on a variety of levels - the men helping coach the women (starting with just teaching us the game), attending each other's games, fraternizing with the players, etc.

Occassionally a traveling rugby club would come through, and although during these days there were no traveling international women's teams, the Eleanors helped host - attending the games, joining in on the parties, and occassionally fraternizing with the visting teams. (Good euphemism - fraternizing). We played visiting teams from Argentina, Japan and Wales. The Crown City Club traveled to England, Wales and France to play rugby teams there, including the team from Wales who had visited us in Pasadena.

This is a postcard from that trip. I didn't get to attend, having just started at my first job in advertising.
Posted by Mary at 7:06 AM