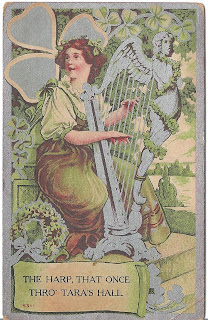 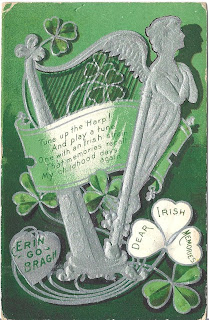 It's Postcard Friendship Friday, and the posting of postcards for St. Patrick's Day has begun, with the theme suggested by the event's new hostess.

Both of these cards were sent in 1911, and are part of my friend Debra's holiday postcard collection she got from her grandmother.

I had to look up the origins of St. Patrick's Day, and it turns out the Irish have been commemorating the day for over 1000 years.

This from History.com:  "St. Patrick's Day is celebrated on March 17, his religious feast day and the anniversary of his death in the fifth century. The Irish have observed this day as a religious holiday for over a thousand years. On St. Patrick's Day, which falls during the Christian season of Lent, Irish families would traditionally attend church in the morning and celebrate in the afternoon. Lenten prohibitions against the consumption of meat were waived and people would dance, drink and feast—on the traditional meal of Irish bacon and cabbage."

And so it could be said that St. Patrick's Day started as a way to get out of the restrictions of Lent, at least for a day!

Also had to look up the significance of the harp, seen in both postcards.

From Wikipedia: "Until the end of the Middle Ages the Gaelic harp (the historical clarsach or Irish harp) was the highest status musical instrument of both Scotland and Ireland, and harpers were amongst the most prestigious cultural figures amongst Irish and Scottish kings and chiefs. In both countries, the harper enjoyed special rights and played a crucial part in ceremonial occasions such as coronation and poetic recital.  The main function of the Gaelic harp in medieval Scotland and Ireland seems to have been playing to accompany the recitation of bardic poetry in Gaelic or Irish.

And from Symbols of Ireland:   "The harp has long been a symbol of Ireland. Perhaps the legends of it's magical powers comes from the time when the bards would sing and tell stories of famous events to the Irish kings and chiefs.  During the early 1500s, under the rule of Henry VIII, the harp was first depicted on Irish coins. That tradition is carried on today and the harp is also used for other official duties such as the Irish state seal, official documents and uniforms."

Finally, it's too bad metalic silver doesn't show well on-line, as both cards are actually metallic silver where they look grey.