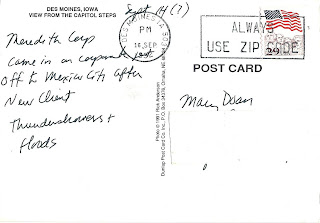 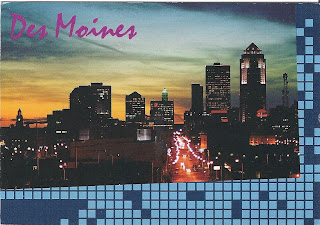 Time to start in on the next seven states in alphabetical order, beginning with Iowa.

Des Moines is the only place in Iowa I've visited, and that was, surprise surprise, on business several years back.  We were there to meet with Meredith Corporation about their first corporate ad campaign for all their media properties, which at the time were primarily magazines. Previously, all the individual media properties did their own advertsing campaigns.  I still have a coffee mug with the slogan and icon from that campaign: "If it has to do with home and family, it has to be in Meredith." Their positioning hasn't changed since then.

I remember being as impressed with the company and the people who worked for them as any company I've ever been exposed to.   They were very smart and very nice without being easy.  They also sent their corporate jet to San Francisco to pick up and fly seven of us to their Des Moines headquarters for a full briefing.  That was awesome, to say the least.

My other impressions of Iowa come from Radar in the television show Mash, whatever my dad told us from having spent a semester at Iowa State on a tennis scholarship, and my friends David and Adam, brothers who are from Iowa.  I hope if I ever make that road trip across the US, I drive through and spend some time in Iowa.  I just have this feeling it might be more interesting than it's made out to be.  And then again, maybe not.
Posted by Mary at 2:17 PM