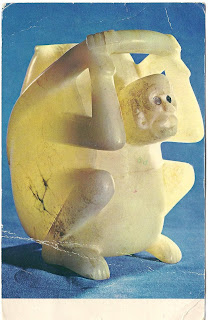 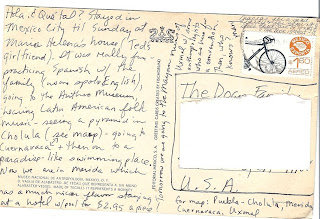 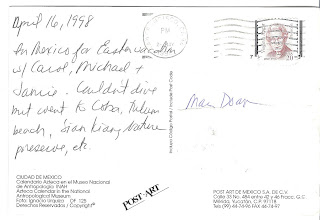 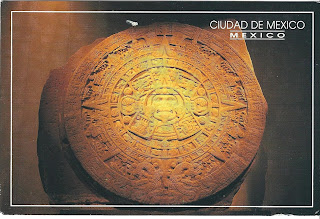 Have you ever been to the Museo de Antropologia in Mexico City?  It is an incredible place.  Here are two postcards  sent from there, one sent from the first time I was in Mexico City and just beginning my travels through Latin America, and the other sent when I took my kids to Mexico City 20 years later.

The first postcard reminded me that when I left to travel in Latin America, my family put up a large map of Latin American in the breakfast room.  When they received a postcard from me, they would put pins in every place I mentioned on the postcard, thus the listing:  Puebla, Cholula, Merida, Cuernavaca, Uxmal.  Through these pins, they were able to track my travels.

The second postcard was from a trip to Mexico with the kids.  Even though we were on our way to Akumal, on the beach in the Yucatan, I wanted them to know that Mexico isn't just beaches.  I think they got the message.
Posted by Mary at 11:34 PM