One daily challenge for me is deciding which postcard to post that day.  Sometimes, I post late in the day because I can't face sorting through and choosing.  Other times, I get on a theme and it makes my choosing a lot easier.

Conversely, it fascinates me to think about why postcard senders choose one card over another to send.  Some go for the best representation of where they are, choosing a card that not only shows, for example, a famous landmark in London, but also says "London" over the visual.  Others seek out the obscure, or choose photographs of a piece of art in a museum they've visited.  Still others find funny postcards, picking pictures of outhouses, or donkeys, or whatever image tickles their funny bones.  Finally, others are correspondents using poscards as a vehicle and this function can take a variety of forms.

This thought came to mind as I was sorting through another HUGE stack of postcards I received from my friend, Steve.  (Thanks again, Steve!) Among other particularly interesting cards was a group of cards from the dioramas inside the Visitor Center at Grand Canyon National Park. [Note:  It is very possible these dioramas no longer exist.]

My first reaction was, "why would anyone choose to send pictures of dioramas inside a visitor's center when there are so many pictures of the grandeur of the Grand Canyon?"   Then I started reading the backs, which offered interesting, athough brief, natural history information.

So here's your Grand Canyon geography and history lesson for today: 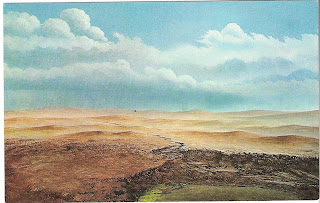 Fom the back of the card:  "The dark rocks in the bottom of Grand Canyon, nearly two billion years old, are the roots of ancient mountains which were eroded away.  Earliest known life developed as primitive one celled plants in pools of water on the resulting lowlands." 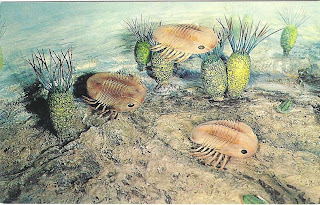 "A sea covered northern Arizona during the Cambrian period (about 500 million years ago).  Trilobites were the dominant sea creatures.  Fossils of these extinct relatives of crabs and lobsters are found in Grand Canyon rocks."

I have to confess I have always been fascinated by trilobites and whenever I go tidepooling, am convinced they still exist. 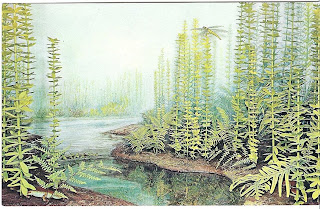 "Evidence found in the Supai and Hermit formations in Grand Canyon indicates that about 200 million years ago this region was a low floodplain.  Ferns and cone-bearing plants grew in swamps inhabited by primitive salamander-like creatures and large insects."


Kind of a big leap from 200 million years ago to 1540....."Don Garcia Lopez de Cardenos, one of Coronado's officers, led a small group of Spanish soldiers to the Grand Canyon in 1540.  These first white men to see the Canyon were guided to the south rim by Hopi Indians."


"In 1869 Major John Wesley Powell (Lake Powell?) a geologist and one armed veteran of the Civil War, led the first boat expedition through Grand Canyon.  In August, he camped near the mouth of a beautiful clear stream which he named Bright Angel Creek."
Posted by Mary at 3:21 PM