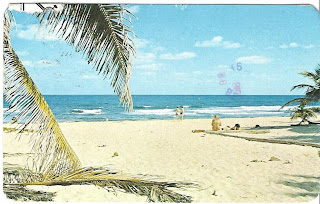 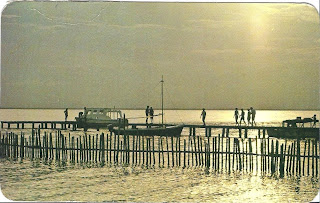 I can't resist two more postings about Mexico, and after that I promise I'll move on.

Both of these postcards were sent from Isla Mujeres, a municipality in the state of Quintana Roo.  This municipality includes an island by the same name off the coast of the Yucatan, a few miles north of Cancun.  I visited this island in 1978, and these postcards were sent from there in 1980.  Development of Cancun didn't even begin until 1970, and it was nothing like the huge tourist destination it is today.

Isla Mujeres isn't quite the same as it was back in 1978.  At that time, the streets were sand, there were no cars and only a few hotels and restaurants.  I remember getting a ride in a relatively small launch from Puerto Juarez to the island, arriving at the island on a dock like the one on the postcard to the right, and staying in a hostel type place with some other travelers.  It was our first time really meeting "gringo trail" travelers, as prior to our trip to Isla Mujeres, we'd been staying with a family in Mexico City.  We were enthralled by the tales told, the distances traveled, the low cost of eating, sleeping and getting around.  We spent a few idyllic days here before heading off to Guatemala.

In all the times I've been to the Yucatan peninsula, I've never gone back to Isla Mujeres.  Somehow, it's one place which I haven't wanted to see in its current iteration.  However, I might change my mind.  It's just north of Isla Mujeres where you can snorkle with whale sharks June through August.  Bucket list!!!!!! - maybe even top five bucket list contender.  Check it out here.
Posted by Mary at 6:35 PM