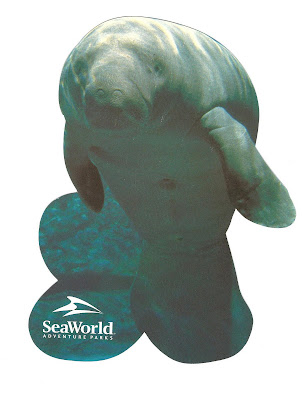 It's Friday the 13th.  Do you know what your superstitions are?  I am not particularly superstitious but a Friday the 13th does make me stop, for just a second, and think about the day.  The black cat thing doesn't bother me, as we had a black cat for 14 years and if I had worried about her crossing my path, I would have been unable to move around in my own home.

What about manatees?  Do you think it's bad luck if a manatee crosses your path? I can't imagine how. Manatees are gentle, slow moving herbivores, who are thought to be at least as intelligent as dolphins and whales.

Perhaps we should start a superstition that it is good luck if a manatee crosses your path.  This superstition might help minimize the damage inflicted on them daily by speed boats in their habitat.  From the Wiki:


Their slow-moving, curious nature, coupled with dense coastal development, has led to many violent collisions with propellers from fast moving recreational motor boats, leading frequently to maiming, disfigurement, and even death. As a result, a large proportion of manatees exhibit propeller scars on their backs. ....Often the cuts lead to infections, which can prove fatal. Internal injuries stemming from hull impacts have also been fatal.
Manatees hear on a higher frequency than what would be expected for such large marine mammals. Many large boats emit very low frequencies which confuse the manatee and explain their lack of awareness around boats.
In 2003, a population model was released by the U.S. Geological Survey that predicted an extremely grave situation confronting the manatee in both the Southwest and Atlantic regions where the vast majority of manatees are found. It states,
“In the absence of any new management action, that is, if boat mortality rates continue to increase at the rates observed since 1992, the situation in the Atlantic and Southwest regions is dire, with no chance of meeting recovery criteria within 100 years."
A 2007 University of Florida study found that more than half of boat drivers in Volusia County, Florida, sped through marked conservation zones despite their professed support for the endangered animals. ...84 percent of the 236 people who responded claimed to obey speed limits in manatee zones during their most recent boating experience, but observers found that only 45 percent actually complied.
If you've ever seen a film about these animals, or seen them alive, either in captivity or in the wild, you'd know how incredible they are and how terribly sad it is that the selfishness of humans is hastening their demise.
A shout out the Mystery Sender who sent this card, perhaps by chance or perhaps in response to my post on August 3 about beluga whales in which I mentioned that I thought the beluga whale and the manatee looked like distant cousins.  I imagine it wasn't by chance.