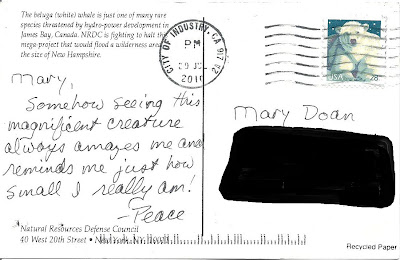 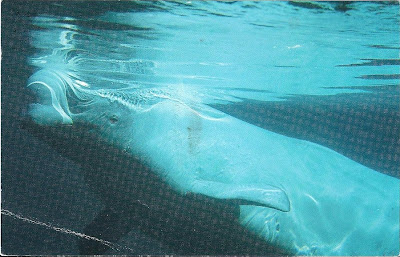 The beluga whale is incredibly well-adapted to arctic waters.  It is relatively small, for a whale, but still huge as far as ocean mammals go  Males can grow up to18 feet long and weigh up to 3500 pounds, with females growing up to 13 feet and 2,600 pounds.  In appearance, the beluga looks like it could be the manatee's cold water distant cousin.

The beluga whale "is considered an excellent sentinel species (indicator of environment health and changes)."  According to the NRDC (National Resources Defence Council), its very existence "is threatened by hydro-power development in James Bay, Canada....this mega project would flood a wilderness area the size of New Hampshire."  It's not clear to me exactly how flooding will impact its survival, unless the hydro-electric development adds lots of bad stuff to the water.   From the Wiki:  " ... pollution is proving to be a significant health danger. Incidents of cancer have been reported to be rising as a result of St. Lawrence River pollution. Local beluga carcasses contain so many contaminants that they are treated as toxic waste.[citation needed] Reproductive pathology has been discovered here, possibly caused by organochlorines. Levels between 240 ppm and 800 ppm of PCBs have been found, with males typically having higher levels.[18] The long-term effects of this pollution on the affected populations is not known."


Most likely, any of you who had children after about 1985 at least heard, if not owned, the cd "Baby Beluga" by Raffi.  The title song of the cd is considered by many to be Raffi's greatest song.
Posted by Mary at 6:00 AM