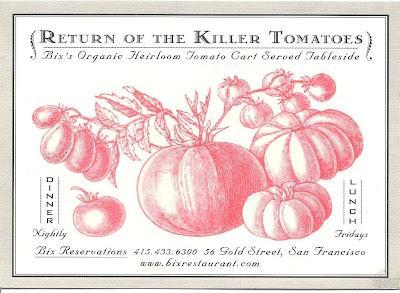 As far as I'm concerned, summer is the only time to eat tomatoes. I never really like them except in sauces the rest of the year - they're often mealy and flavorless and not really worth the trouble.

This year, the entire state of California has experienced a relatively mild summer, which is great from a liveability standpoint (except for those of us in San Francisco who have experienced the foggiest summer in 40 years), but not great from a farmer's standpoint, whether commercial or backyard. Tomato growing has been particularly thwarted. I wonder if the promotional postcard, above, was delayed due to the product's availability?

In June, we planted a backyard garden, including three kinds of lettuce, arugula, tomatoes and basil. The lettuce has done great. The tomatoes, on the other hand, grew into beautiful bushes and then started fungi-ing themselves to death. We had one measly green tomato appear, but ultimately had to just pull the disintegrating bushes without harvesting a single tomato. Even my mom, who grows a variety of beautiful tomatoes in her backyard, has only just started harvesting. In a normal year, she'd be rolling in tomatoes by late July.

Speaking of rolling in tomatoes, the annual Tomatina, Spain tomato fight took place last Wednesday. (See photos here.) For this annual food fight festival, upwards of 40,000 people descend on the town of 9,000 and spend one to two hours throwing 100 tons of mushy tomatoes at each other. It sounds like a blast.

Note to anybody who lives in the Bay Area: If you're looking for killer tomatoes, we discovered a place off 101 in Morgan Hill, Dave's Famous Old Tomatoes. It's worth a visit, if you are so inclined.
Posted by Mary at 6:00 AM