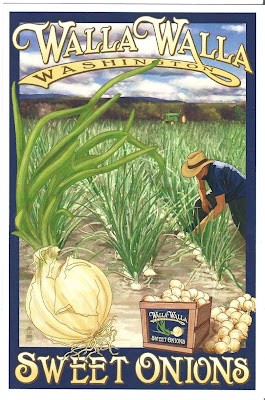 We passed through Walla Walla, Washington during July's whirlwind road trip to Missoula and back in six days. According to the locals, it is the new "Bend, Oregon" - a town that is relatively far removed from anything else, but that is kind of hip and cool. We only stopped for lunch there, but the downtown was way more than just okay.
I've long been aware of Walla Walla for two reasons:

1. My college roommate's boyfriend (now husband of many years) attended Whitman College in Walla Walla, and in those days we often referred to him as Walla Walla. (Side note: The official mascot of Whitman College is the "Fighting Missionaries" which, although controversial due to its implied imperialistic bent, did inspire one of the all time great college cheers: "Missionaries, Missionaries, We're on Top".  Oh, how I wish I had looked harder for a Whitman College postcard!.)

2. The sweet onions. There are three well-known brands of sweet onions: Walla Walla Sweet Onions from Washington state, Vidalia Onions from southern Georgia, and Maui Onions from Hawaii. I imagine in onion circles there is much debate over which is sweeter, better, easier to cook with, etc. as well as the potental for significant trademark infringement and branding issues.

Anybody have an opinion one way or the other? Does an onion debate even exist?
Posted by Mary at 6:00 AM