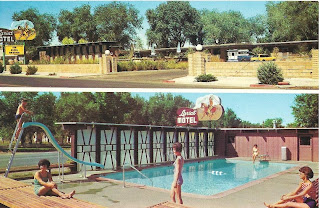 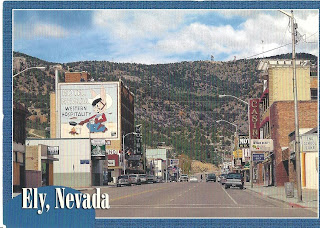 What most people think about when they hear "Nevada" is Las Vegas. And while Las Vegas is Nevada's largest city, and fabulous in its own very cheesy, sleazy way, there's a lot more to Nevada than Viva Las Vegas.
A few years back, we took a family road trip from San Francisco to Aspen, Colorado which, because I had more time on my hands than usual before we left, was pretty specifically planned out. [Regular readers know of my fondness for road trips, but may not know that I often like to just see what happens, without planning.]  One of my goals for this particular road trip was to stay in non-chain hotels/motels only (a tad risky, I'll admit, but much more exciting), and to avoid the Interstates as much as possible.  To my children's great dismay, I succeeded.
The postcard above left is from the Lariat Motel in Fallon, Nevada, where we stayed our first night.  Considering the age of the postcard (it has to date back at least to the 1970s, if not before, and our trip was sometime in 2001) and the condition of the room, it was pretty clear not much had changed in 30 years, including the bedspreads, furniture and carpeting.  But the motel had a killer neon sign and Fallon, Nevada is the beginning of the "loneliest highway in America" section of Highway 50 which we (okay, maybe just me) were excited to explore.  Road Trip USA describes Highway 50 across Nevada as follows:
Between Lake Tahoe in the west and Great Basin National Park on the Utah border, US-50 crosses more than 400 miles of Nevada’s corrugated country, climbing up and over a dozen distinct mountain ranges while passing through four classic mining towns and the state capital, Carson City. Early explorers mapped this region, Pony Express riders raced across it, and the long-distance Lincoln Highway finally tamed it, but the US-50 byway has always played second fiddle to the I-80 freeway, the more popular northern route across the state. Besides being a more scenic alternative to the mind-numbing, and therefore accident-prone, I-80, US-50 across Nevada has gained a measure of notoriety in its own right—it’s known as the “Loneliest Road in America.” As you travel along it you’ll see road signs, T-shirts, and bumper stickers proclaiming it as such.
Along this route, just outside of Middlegate, NV is one of the finest examples of shoe trees in the country.  Turns out there are currently at least 76 shoe trees on highways across America and it's worth keeping an old pair of tennies in your car, just in case you happen upon one.  On Highway 50, driving across the middle of nowhere at 75 miles per hour with very few trees in sight, the Shoe Tree first appears as an optical illusion.  As there aren't a lot of cars on this stretch of road, it's easy to decide to hang a U-turn and go back and check it out.  Don't miss it!
250 miles later, give or take a few, along the route of the Pony Express, you arrive in Ely, Nevada, whose main street is featured in the postcard, above right.   Ely is the gateway to Great Basin National Park, a national park I had never heard of before I started looking into a route for our trip.  In Great Basin National Park are the Lehman Caves, containing the most incredible collection of stalactites and stalagmites I'd ever seen.  The postcards below pretty much say it all. 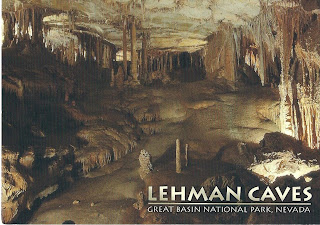 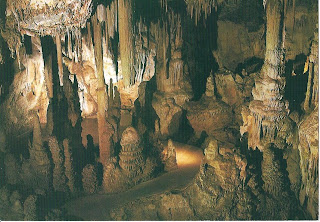 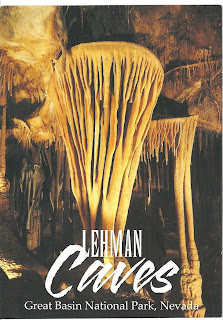 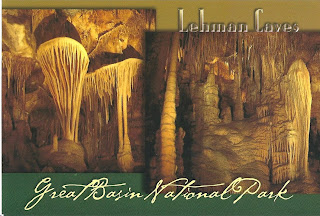 Today is Postcard Friendship Friday.  You know what to do.
Posted by Mary at 12:10 AM