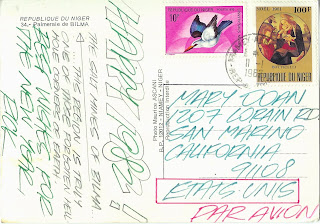 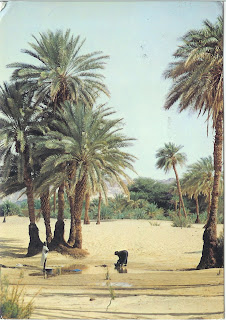 I went to graduate school at a place called The American Graduate School of International Management, Thunderbird for short. The student body was about half American, half from other countries. Many of the Americans had been in the peace corps, or had parents in diplomatic posts, or had lived outside the US for a variety of other reasons. My friend, Rick, had worked in West Africa and then returned there after graduate school. I have no idea what ever happened to him, but I remembered him when I came across this postcard. In it, he describes the salt mines of Bilma in Niger as "truly one of those forgotten hell hole corners of the earth". I'm not sure "palmeraie de Bilma" means "salt mines of Bilma", but I've got to go on what he says. Looking at the Wikipedia entry, it doesn't appear much has changed there in 25+ years. (www.en.wikipedia.org/wiki/Niger)
Posted by Mary at 12:27 PM