The Mapparium at Christian Science Church in Boston 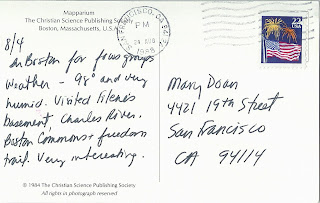 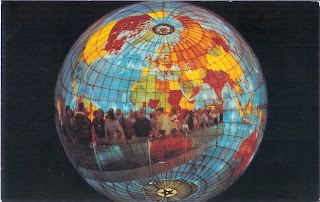 The Mapparium is a huge glowing globe of the earth that you walk through. Except I remembered it as being called the "mappetorium". Hmmm. This must have been the first time I visited Boston. I sent this postcard to myself, sort of like a mini-journal, noting why I was there (focus groups, although I can't remember the product), the weather (hot and muggy), and different things I did while I was there. I do remember that the focus groups were at night which was why I could wander around the city as a tourist during the day. I was determined to visit the Christian Science Church, called the Mother Church by Christian Scientists, as both my grandmothers were Christian Scientists and I attended Christian Science Sunday school as a kid. The Mapparium was a wonderful surprise.

As I've been going through my postcards, it's been interesting to see the different addresses at which I've received postcards (I no longer live at the one above), and the different people who have sent postcards to me.
Posted by Mary at 7:25 AM