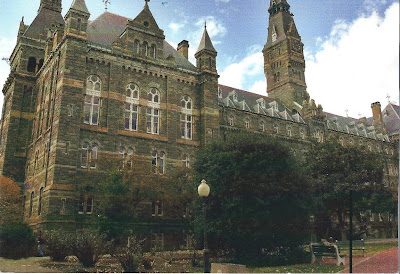 Regular readers and friends know that one of my sons attends Georgetown University.   He fell in love with the school within minutes of visiting the campus.

The postcard above shows one of the reasons why:  it's an absolutely beautiful campus with old brick and stone buildings (described by Wiki as collegiate Gothic and Georgian brick architecture) sitting on a hilltop above the Potomac River In Washington, DC and overlooking the Washington Monument.  It's small enough that you can get to know every corner of the campus.  One of the most famous corners is the "Exorcist Steps".  Several scenes in the movie "The Exorcist" were shot on campus, including the one in which the priest falls down the stairs.

Georgetown is the oldest Catholic university (Jesuit) in the United States, and was also the first to bring on a full-time rabbi (1968) and full-time imam (1999).   At the time of its founding, Catholics were not admitted to most American universities, and the founder, John Carroll, had a vision for a university that was "to be open to 'every class of citizens'and students of 'every religious profession.'"

Part of the attraction of Georgetown is its location in Washington, DC.  My son attended the inauguration of Barack Obama, the concert on the mall a couple of days before the inauguration, and has a goal of visiting every free museum in Washington before  he graduates.  There are 17 Smithsonian Institution museums in Washington, DC, including the American Indian Museum, the Portrait Gallery, the Air & Space Museum, the Postal Museum, and the Natural History Museum.  ALL offer free admission.

Side note:  My son is a football player at Georgetown and the football team's record is 2-1 after coming off two miserables seasons.  Yesterday, they lost to Yale in the last play of the game.  Considering Yale is in the higher level Ivy League (D-1) and Georgetown is in the Patriot League (D-1AAA), this is actually reason for celebration!
Posted by Mary at 10:11 AM