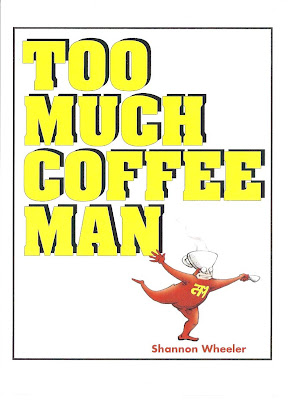 Here's another postcard from Comic-con, this one featuring "Too Much Coffee Man".   How can you not love this superhero?

According to the Wiki on Too Much Coffee Man, the character started as a strip in the University of Texas student newspaper in the early 1990s and  features an anxious Everyman who broods about the state of the world, from politics to people, exchanging thoughts with friends and readers.  Some of Too Much Coffee Man's friends include:


- Too Much Espresso Guy is TMCM's cynical and cold-hearted friend. Their friendship appears mostly based upon mutual loneliness and a shared pessimism.
- Too Much German White Chocolate Woman With Almonds is a mutual friend. She is pale-skinned, worries a lot, and has large almonds on her face.
- Underwater Guy is another mutual friend, who wears a wetsuit with a diving snorkel and mask. He has the ability to remain underwater indefinitely.
- Mystery Woman is TMCM's secret love.
Sounds pretty good.  Any of you out there actually read this comic strip?
Posted by Mary at 6:00 AM

Labels: Comic-con, Too much coffee man