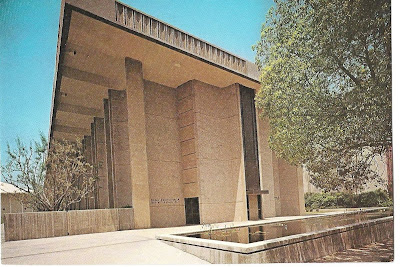 My first job out of college was as a technical typist at Caltech, formally known as California Institute of Technology, in Pasadena, California.  I was working there and living at my parent's house to save money to go traveling in Latin America. The campus is beautiful - a mix of modern and less modern, often Spanish style, buildings, and a wide variety of vegetation. In the courtyards of more than one of the Spanish buildings are orange trees, and when they bloom in the early spring, the sweet fragrance wafts over the entire campus. Baxter Hall, which is the building in the postcard above, is the building where I worked.

Caltech is the west coast MIT (Massachusetts Institute of Technology), with super smart, math and science oriented students, who are proud of their nerd orientation.  One of the great traditions of the school is senior ditch day, described by the Wiki as follows:


On Ditch Day, the seniors ditch school, leaving behind elaborately designed tasks and traps at the doors of their rooms to prevent underclassmen from entering. Over the years this has evolved to the point where many seniors spend months designing mechanical, electrical, and software obstacles to confound the underclassmen. Each group of seniors designs a "stack" to be solved by a handful of underclassmen. The faculty have been drawn into the event as well, and cancel all classes on Ditch Day.
Caltech is famous not only for their brilliant scientists, multiple Nobel prize winning professors,  and Einstein's time on campus, but also for their pranks.  Many of the pranks are directed toward MIT, but their two most famous pranks involved the Rose Bowl, which is also located in Pasadena.  Per the Wiki:
The two most famous in recent history are the changing of the Hollywood Sign to read "Caltech", by judiciously covering up certain parts of the letters, and the changing of the Rose Bowl scoreboard to an imaginary game where Caltech beat MIT 99-0. But the most famous of all occurred during the 1961 Rose Bowl Game, where Caltech students altered the flip-cards that were raised by the stadium attendees to display "Caltech", and several other "unintended" messages. This event is now referred to as the Great Rose Bowl Hoax.
My job was working for several professors in the Department of Humanities and Social Sciences.  All this was pre word processing and computers, and as most of the professors were engaged in some form of econometric modeling (the economists) or voter choice behavior (the political scientists), all the papers I typed involved complicated equations, complete with a variety of numbers and symbols.   I was really good at this, both because I have always been a speedy typist and also because I took a fair amount of calculus in college and actually knew the symbols involved.

As first jobs out of college go, it was a great one.  The departmental politics were astounding.  The dalliances that went on were surprising.  I was lucky enough to get invited most Fridays to the faculty/grad student lounge, and sit at tables with brilliant scientists and grad students, drinking beer, listening to fascinating discussions, observing heated debates, and watching the huge variety of shenanigans that went on.  It was a blast.

Perhaps the most surprising time was when what I had thought was yet another Caltech "urban legend" turned out to be real.  I had heard rumors of a radio scientist who dressed like Robin Hood, a brilliant man who was perhaps a bit off, at least relative to your average man on the street.  I didn't believe this until one day, leaving work, a man walked right by me, complete with tunic, tights, pointed shoes and a felt Robin Hood hat.   Just one of many "only at Caltech" types of moments.