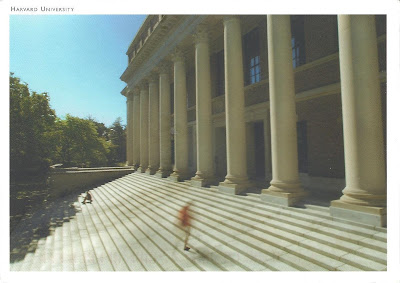 Harvard University is the oldest "institute of higher learning" in the U.S., and, interestingly, the first chartered corporation.  Located in Cambridge, Massachusetts, it is considered one of the top universities in the both the country and the world.  This year, the university admitted less than 7% of the applicants for the 2014 graduating class.

Here's a couple random tidbits about Harvard you might not be aware of:

1. Harvard has the largest financial endowment of any university in the world:  25.6 BILLION US dollars.

2. Harvard was not officially co-ed until 1977, although before 1977 women at Radcliffe were allowed to take classes at Harvard.  From the Wiki:


"During World War II, Harvard and Radcliffe signed an agreement which allowed women to attend classes at Harvard for the first time, officially beginning joint instruction in 1943. From 1963, Radcliffe students received Harvard diplomas signed by the presidents of Radcliffe and Harvard, and joint commencement exercises began in 1970. The same year, several Harvard and Radcliffe dormitories began swapping students experimentally, and in 1972 full co-residence was instituted. The schools' departments of athletics merged shortly thereafter."
3.  Harvard is considered a liberal institution.  Over the years, there have been some memorable references by conservative pundits and presidents.  From the Wiki:
"Conservative author William F. Buckley, Jr. quipped that he would rather be governed by the first 2000 names in the Boston phone book than by the Harvard faculty,  Richard Nixon famously referred to Harvard as the "Kremlin on the Charles" around 1970, and Vice President George H.W. Bush disparaged what he saw to be Harvard's liberalism during the 1988 presidential election."
4.  It wasn't until 2002 that the little known "Secret Court of 1920" was "outed".  The Secret Court refers to a committee which was formed to investigate charges of homosexual activity among the student population in May and June of 1920.  More than 30 interviews were conducted  behind closed doors and eight students, a recent graduate, and an assistant professor were expelled or had their association with the university severed.
Let's face it - if your kid gets into Harvard, it would be difficult not to be tempted to slip this information into a conversation, any chance you get.
P.S.  A shout out to my friend Sasha, a sophomore at Harvard, for sending me this card!
Posted by Mary at 6:00 AM