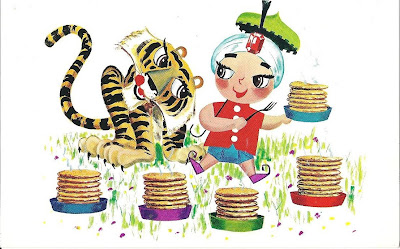 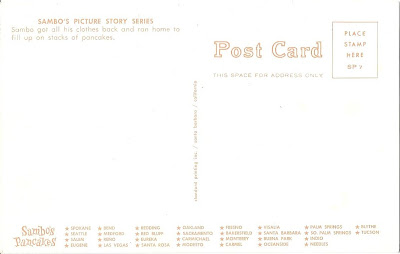 Sambos Restaurant was founded in 1957 in Santa Barbara, California.  At one point there were as many as 1200 locations.   I remember eating pancakes at a Sambos, more than once.  Today, only the original remains.

While the name "Sambo" was a combination of the names of the two founders, it became associated with a popular children's book at the time, Little Black Sambo, first published in 1899.  The "owners capitalized on the coincidence by decorating the walls of the restaurants with scenes from the book, including a dark-skinned boy, tigers and a pale, magical unicycle-riding man called 'The Treefriend.'"  In the early 1970s, the chain distributed a series of postcards, called the "Sambos Picture Story Series".  Number seven of the series of nine is pictured above.

The Wiki describes the story well:

An Indian boy named Sambo prevails over a group of hungry tigers. The little boy has to give his colourful new clothes, shoes, and umbrella to four tigers so they will not eat him. Sambo recovers the clothes when the jealous, conceited tigers chase each other around a tree until they are reduced to a pool of delicious melted butter.

I remember reading this book as a child, and the image of the four tigers turning into butter has always stayed with me.  It seems neighborhood mothers admonished us with the threat of turning into butter when, as children, we ran wildly in circles chasing each other.  This image was further cemented in my memory by the fact that the butter at a Sambos was called "Tiger Butter".

While the chain lightened the skin of the little boy over time, and no  longer referred to him as Little Black Sambo, the term "Sambo" is a racial slur in some countries and the image of "Little Black Sambo" in the US is not exactly PC.  Both the book and, ultimately, the chain fell out of favor.  It filed for bankruptcy in 1981 and attempted a series of name changes in a desperate effort to survive, but by 1982, all but one location remained.

This is a good example of a brand icon "turning" on the brand, and bringing it down.  Can anybody think of any others?