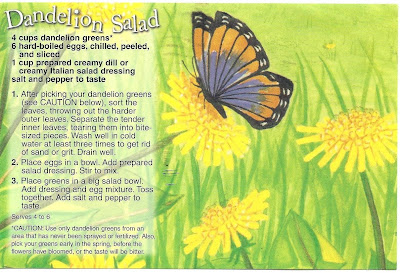 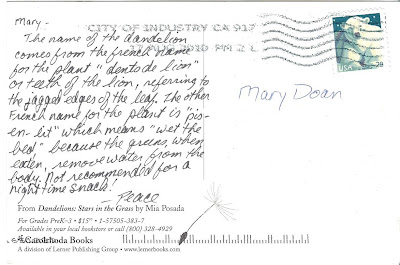 Food foraging is the latest in the Bay Area foodie scene.  I've got mixed feelings about this new trend, as it has the potential to be yet another excuse for "entrepreneurs" to decimate our natural resources.  (Other examples include abalone and sea urchin poachers.)  However, if any plant is going to be foraged, let it be the dandelion.  The plant appeared about 30 million years ago, and has been used as a food and an herb for much of recorded history.

Thanks to the Mystery Sender for this dandelion salad recipe and information.   As the message says:


The name of the dandelion comes from the French name for the plant "dents de lion" or teeth of the lion, referring to the jagged edges of the leaf.  The other French name for the plant is "pis-en-lit" which means "wet the bed" because the greens, when eaten, remove water from the body.  Not recommended for a night time snack!
The Wiki provides additional  insight as to the origin of the name:
In modern French the plant is named pissenlit, (or pisse au lit in the vernacular).   Likewise, "piss-a-bed" is an English folk-name for this plant, as is piscialletto in Italian and the Spanish meacamas.  These names refer to the strong diuretic effect of the roots of the plant.  In various north-eastern Italian dialects the plant is known as pisacan ("dog pisses"), referring to how common they are found at the side of pavements.
The recipe for Dandelion Salad includes the caution that the greens be harvested only "from an area that has never been sprayed or fertilized".  I think they should add a caution about dogs, as well.
Posted by Mary at 6:00 AM