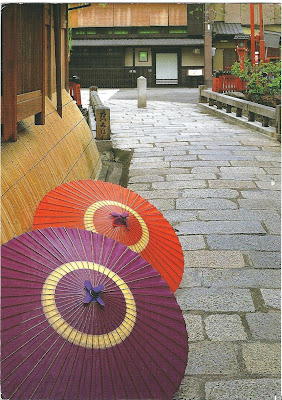 In case you haven't noticed, I'm having fun with segues, shifting effortlessly (at least in my view) from "The Umbrellas" of Christos in California and Japan, to umbrellas in Japan.

Another Postcrossing postcard, this time from Kazue who lives in Nara, close to Kyoto. To me, this is a spectacularly beautiful, and very Japanese image, which came to mind often during and after the tsunami in Japan.  I find the stark contrast between this shot and the shots of the tsunami destruction particularly moving.

Japan is a bucket list place for me, in part because I lived there for a couple of years when I was very young, and while I spent a lot of time with our Japanese neighbors, I don't remember anything. I'm told I spoke Japanese at a two-year old level, which is how old I was.  When I am with a group of Japanese speakers, I feel the rhythm of their language at a visceral level, and would love to immerse myself in the culture one day.  I'm convinced the language is buried in the deep structure of my brain, and through a combination of studying and total immersion, I might actually be able to learn the language without too much difficulty.  Wishful thinking, perhaps, or not..
Posted by Mary at 6:20 AM