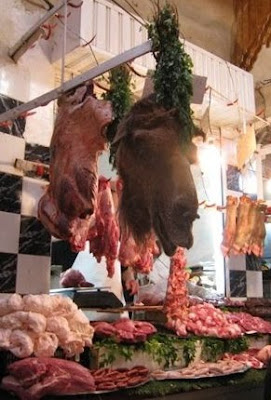 My friend's house in the Medina in Fez, Morocco is just off Tala'a Kbira, along which are primarily food stalls and street vendors.   And while this photo isn't a postcard it would probably generate a lot of sales if it were, as this place is among the most photographed stalls in the Medina.  Most of the postcards of businesses in the Medina feature the tanneries - this one would be different!

As you might or might not imagine, this stall sells camel meat.  The camel head is its primary marketing icon.  Besides the raw meat, one of the offerings appeared to be like a sausage, although very large.  While a local told me it was a stuffed camel pancreas, I think it was more likely a stuffed camel spleen, and is one of the very few meat dishes sold in the market that is already cooked, and "ready to eat".   I did not try any.

I did try a camel burger at Cafe Clock.   (See previous post on Cafe Clock here.)  Believe it or not, a camel burger is surprisingly delicious. This audio slide show by The Guardian gives a pretty good overview of the cafe and the burger.