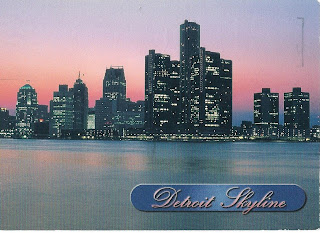 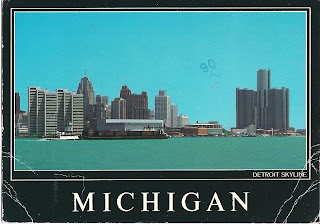 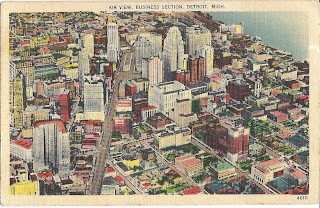 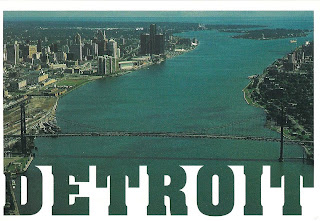 Seems I haven't done a "seven states in a row" series in a while, so I thought I'd start one today. This series will take us through Nevada. First up, Michigan.

Considering Michigan is the 11th largest state in the US, I was a bit surprised to find that every postcard I have of Michigan is of Detroit. Three of the four cards I sent to myself from business trips, but the card in the lower right corner was sent to me by the Mystery Sender with these random facts about Michigan on the back:

1. Colon, Michigan is home to the world's largest manufacturer of magic supplies.
2. Novi, Michigan was named for its designation as "Stagecoach Stop #6" or "No.VI" [Note: See section on Wiki about origin of name - Random fact #2 may be historically innacurate - an early urban legend, perhaps.]
3. Michigan ranks first in state boat registrations. (Who knew?)
4. The painted turtle is the state's reptile.
5. Indian River, Michigan is home to the largest crucifix in the world - the Cross in the Woods.
6. Michigan has more shoreline than any other state except Alaska. (Wow!)

A random (and frightening) fact about Detroit is that as of February 2010, its unemployment rate was 25.6%. I doubt the rate has improved much; if anything it's probably worse.
Posted by Mary at 8:41 AM