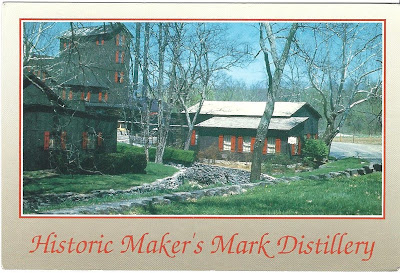 Its a logical segue from a Kentucky horse racing course to a short series on bourbons and whiskeys.

The first question to be answered, not surprisingly, is:  what is the difference between bourbon and whiskey?  The short answer is:  not all whiskey is bourbon, but all bourbon is whiskey.  Bourbon must be aged in charred oak barrels and aged for two or more years.  The longer and pretty interesting answer from "The Straight Dope" website is:


A definition of whiskey/whisky from www.kentuckyconnect.com: "Whisky is an alcoholic distillate from a fermented mash of grain produced at less than 190 proof in such a manner that the distillate possesses the taste, aroma, and characteristics generally attributed to whiskey, stored in oak containers (except that corn whisky need not be so stored), and bottled at not less than 80 proof, and also includes mixtures of such distillates for which no specific standards of identity are prescribed."
For a whiskey to qualify as bourbon, the law--by international agreement--stipulates that it must be made in the USA. It must be made from at least 51% and no more than 79% Indian corn, and aged for at least two years. (Most bourbon is aged for four years or more.) The barrels for aging can be made of any kind of new oak, charred on the inside. Nowadays all distillers use American White Oak, because it is porous enough to help the bourbon age well, but not so porous that it will allow barrels to leak. It must be distilled at no more than 160 proof (80% alcohol by volume). Nothing can be added at bottling to enhance flavor or sweetness or alter color. The other grains used to make bourbon, though not stipulated by law, are malted barley and either rye or wheat. Some Kentucky bourbon makers claim that the same limestone spring water that makes thoroughbred horses' bones strong gives bourbon whiskey its distinctive flavor. Kind of like that "it's the water" thing with Olympia beer.

Bourbon can be made anywhere in the U.S., but all but a couple of brands are made in Kentucky. Only the state of Kentucky can produce bourbon with its name on the label. The name comes from Bourbon county in the central bluegrass region of Kentucky. This county was named in 1785 to honor the French royal family and was once the major transshipment site for shipping distilled spirits down the Ohio and Mississippi rivers to New Orleans. Barrels shipped from there were stamped with the county's name, which then became the name of this kind of whiskey. Interestingly, there are no distillers in Bourbon county, Kentucky right now.
As to Maker's Mark Bourbon, the distillery building itself may be historic, but the brand "Maker's Mark" was first introduced in 1959.  With its distinctive red wax seal and squarish bottle, it is unique in that it is one of very few American whiskeys to use the Scottish spelling, "whisky". Maker's Mark enjoys a bit of a cult status among some bourbon drinkers, and for years its advertising slogan was  "It tastes expensive ... and is."
This bourbon is aged from six to seven and one-half years with a panel deciding when it is ready for bottling.  From the Maker's Mark website, "To make sure we always put the same great tasting bourbon out there we created a tasting panel. It's made up of 16 men and woman, and it includes the Master Distiller. Each barrel is sampled five times during the maturation process. Maybe a couple other times, as well. You know, just to be sure."  On the website, you have to submit a birthdate to "prove" you are over 21. Th e sitealso includes recipes, including the Kentucky Ice Tea - an Arnold Palmer, but with bourbon added to the mix.  Sounds pretty good, if you like bourbon.  I do.
Posted by Mary at 7:03 PM