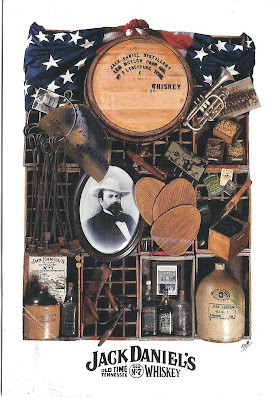 More than any other alcohol, Jack Daniels Tennessee Whiskey reminds me of bars and bikers and blues bands. In my mind's ear I can hear a scruffy guy belly up to the bar and order a "Jack" on the rocks, or ask for a "Black Label" and mean Jack Daniels, not Johnny Walker.
Jack Daniels is a Tennessee whiskey, with an "e" (in whiskey, that is that was established in either 1866 or 1875, and it is hard to know which of the stories around the brand are advertising fabrications/corporate "legend" and which are truth. The Jack Daniels website is beautifully designed and appears to have a wealth of information and history, but is horrific from a useability standpoint. Too bad, because even if the stories aren't the complete truth, the ones I looked at were interesting to read.

According to the Wiki on Jack Daniels, "Tennessee whiskey is filtered through sugar maple charcoal in large wooden vats prior to aging, unlike the process used to make Kentucky bourbon." Three days of bourbon/whiskey postcards and I still find this bourbon/whiskey distinction confusing, to say the least.
Posted by Mary at 6:00 AM