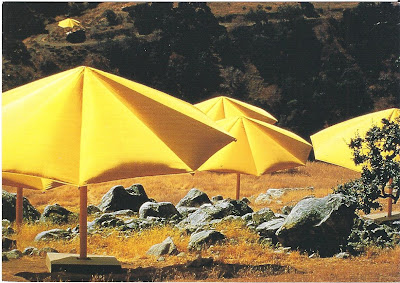 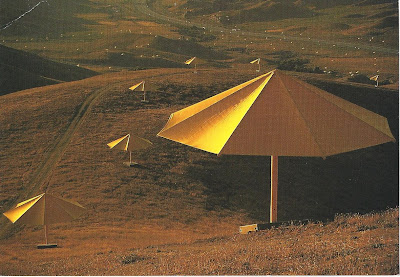 It's been unusually wet this June in California.  In fact, by the time this is posted, we may have broken all recorded records for amount of rain in the month of June, and the month isn't even over.  For that reason, these postcards seem particularly appropriate.  My mom recently unearthed them while packing up her home of 48 years, saved from an excursion she and a bunch of friends took to see the "Umbrellas" in 1991.

One of many environmental works of art that Christos (and his wife Jeanne-Claude) have installed around the world, "The Umbrellas" were erected simultaneously in Japan and the United States. From the wiki:


In December 1990, after much preparation, the first steel bases for the umbrellas were installed.  In September 1991, the umbrellas were brought to their places by 2,000 workers. In California, some of the bases were transported to the site by helicopter. The final cost of the project totaled $26 US million. By 7 September, 1,340 blue umbrellas in Ibaraki and 1,760 yellow umbrellas at the Tejon Ranch in southern California had been set up; the exhibition opened on 9 October 1991. In total, 3 million people saw the umbrellas, each measuring 6 meters in height and 8.66 meters in diameter. The umbrellas became a huge tourist attraction, finding use as everything from picnic spots to wedding altars.
Also from the wiki:
Although their work is visually impressive and often controversial as a result of its scale, the artists have repeatedly denied that their projects contain any deeper meaning than their immediate aesthetic impact. The purpose of their art, they contend, is simply to create works of art or joy and beauty and to create new ways of seeing familiar landscapes.
I saw this installation only from the highway, while driving from San Francisco to Los Angeles, but I remember well all the excitement it generated.﻿
P.S.  I wrote a post about the Christos New York "Gates" installation a while back.  You can read that here.
Posted by Mary at 6:00 AM