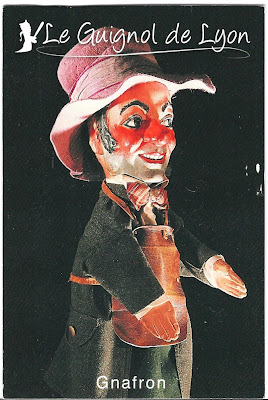 Here we have Gnafron, a classic Lyon puppet and character in the French puppet show, Guignol (also the name of the main character).  From the wiki:

Although often thought of as children's entertainment, Guignol's sharp wit and linguistic verve have always been appreciated by adults as well, as shown by the motto of a prominent Lyon troupe: "Guignol amuses children… and witty adults".

I suppose Guignol would be the equivalent of an English "Punch and Judy", although unlike any character in Punch and Judy, Gnafron is a drunk.  Leave it to the French.

A translated wiki shows a little of Gnafron's history, and it appears he is the inseparable companion of Guignol.

It must be time for marionettes to make a comeback, as it's an art form that hasn't enjoyed a resurgence for a while. Hmmm.
Posted by Mary at 6:00 AM