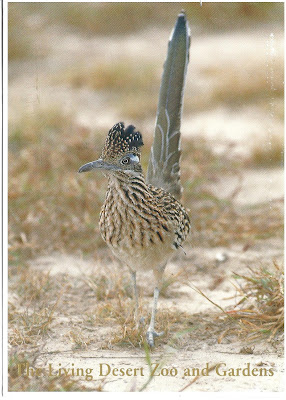 The Greater Roadrunner is a signature bird of the desert Southwest. During the 20th century, its range expanded all the way to southern Missouri and western Louisiana. A ground-dwelling cuckoo, it feeds on snakes, scorpions, and any other small animal it can catch and subdue.

The rather unusual behavior of the roadrunner accounts for its unique name.  When surprised on a road, it will rapidly run away and vanish into cover.  It seldom flies.

The Cornell Lab of Ornithology also includes the sounds of individual birds, and the roadrunner's sound is nothing like the famous "beep beep beep" of the Wile E. Coyote/Road Runner Looney Tune cartoon fame.
Posted by Mary at 5:24 PM