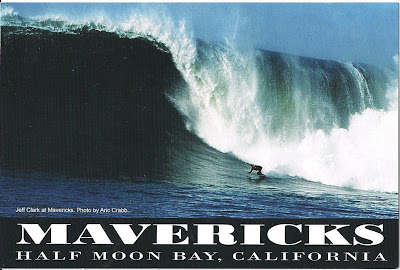 When the surf comes up at Mavericks, the waves are among the largest cold water waves anywhere.
This past week, one of the best big wave surfers in the world, Sion Milosky, was killed there while riding one of these monsters.

I recently read a book called The Wave: In Pursuit of the Rogues, Freaks and Giants of the Ocean.  Not only does it talk about the physics of waves, the giant rogue waves at sea that were considered sailor tall tales until recently, and the changes in insuring ships at sea warranted by these giant waves, it also talks a lot about the really big wave surfing spots around the world, and the surfers who pursue them.  I'm not normally a non-fiction reader, but this book reads like a novel and I couldn't put it down.

Mavericks isn't far from where I live, and it's around the point from a beach where we used to tide pool often.  However, once the surfing contest and its giant waves became renowned over the last ten years or so, our secret tide pooling spot became much less accessible if for no other reason than it's hard to find a space in the hardscrabble dirt parking lot there.  Sigh.  I miss it.
Posted by Mary at 6:00 AM